Previous Next
Community Banking Month Comes to an End 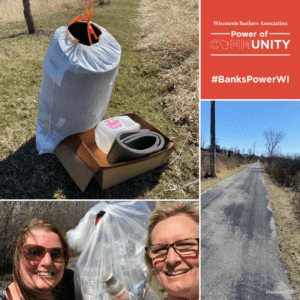 In the month of April we celebrated Community Banking Month, but just because April is over doesn’t mean we stop celebrating being a community-focused bank!

During the month of April, our employees brought in non-perishable food items and monetary donations for the opportunity to wear jeans on Fridays. By the end of the month, we collected five boxes of food items and $163! Donations were distributed to the First Reformed Food Vault (Oostburg) and the Faith Reformed Food Pantry (Cedar Grove).

We also had employees participate in the Wisconsin Bankers Association Power of Community Week by spending a few hours picking up trash along the Sheboygan Interurban Trail between Oostburg and Cedar Grove. At least 5 bags of garbage were picked up, and some trail users thanked the OSB employees for doing such a great thing for our community.